Many entrepreneurs find marketing difficult, and I'm definitely one of them 🥴
by Jon Yongfook · December 2021

Many entrepreneurs find marketing difficult, and I'm definitely one of them 🥴.

I'm a technical founder so I naturally prefer to spend my time building features, and I've certainly done a lot of that in the past year. But in this post I want to share all the things I did in the last 12 months in terms of marketing for my SaaS.

Marketing is a pretty broad term but for a solo founder I would define it as any kind of activity aligned to growth, that does not involve building features.

This is not meant to be a checklist of things you should try yourself, and since I don't use any kind of cookie tracking I don't have any data on which of these activities moved the needle the most (so don't ask me!).

That said, I hope this will be useful to some of you to see a snapshot of what a year of marketing looks like, for a technical founder.

From the beginning I have tried to share as much as possible about the journey I'm on (anyone remember 12 startups?). I have posted milestones on Indiehackers going back a couple of years (although not so much recently).

In January 2021 I published probably the biggest "hit" I've had in terms of marketing up to that point. The Journey to $10K MRR post went sort of viral in our little bootstrapped SaaS world, even making it onto the Hacker News front page. Here's what happens to your website traffic when you get on HN: 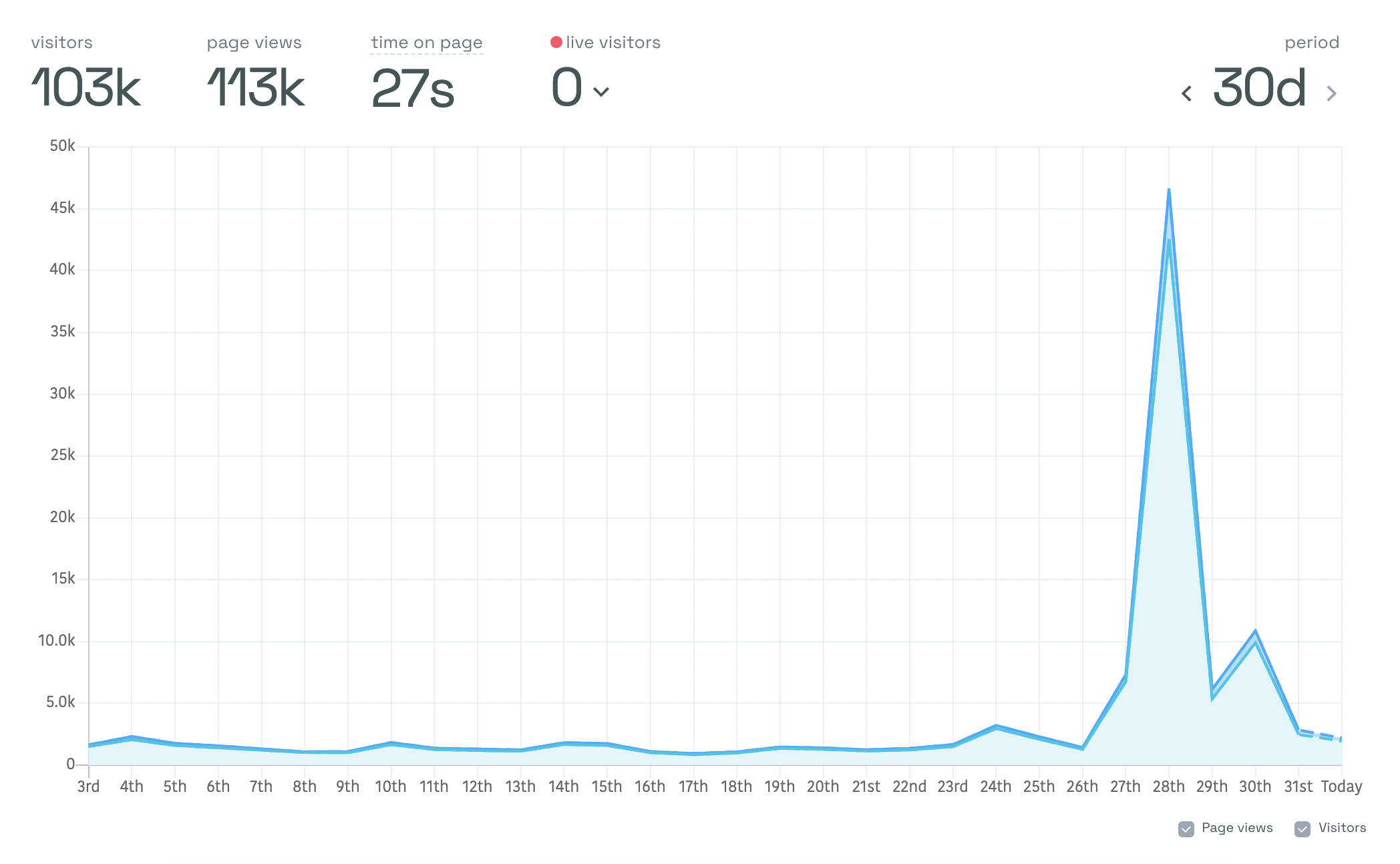 Later in the year I followed up with another set of lessons / thoughts in my 10K to 20K slideshow, which was also shared around and received a nice chunk of traffic.

If there's one activity in this list I wish I spent more time on, it would be this one.

Bannerbear uses a couple of core pieces of technology, notably Puppeteer and FFmpeg. I have spent a lot of the last 18 months basically wrestling with these two technologies, bumping into edge cases, banging my head against a wall etc.

Writing about those findings is a great way to get discovered by people who are experiencing the same problem, and for them to ultimately discover my product which is kind of an abstraction of those two technologies - which just might make their life easier!

It's basically impossible to delegate or outsource creating this type of content - it has to be written by me, based on the experiences I've had while building the product. So I only have myself to blame for not having more of this type of content on the site! This is one of the most popular blog posts on Bannerbear in terms of organic traffic: 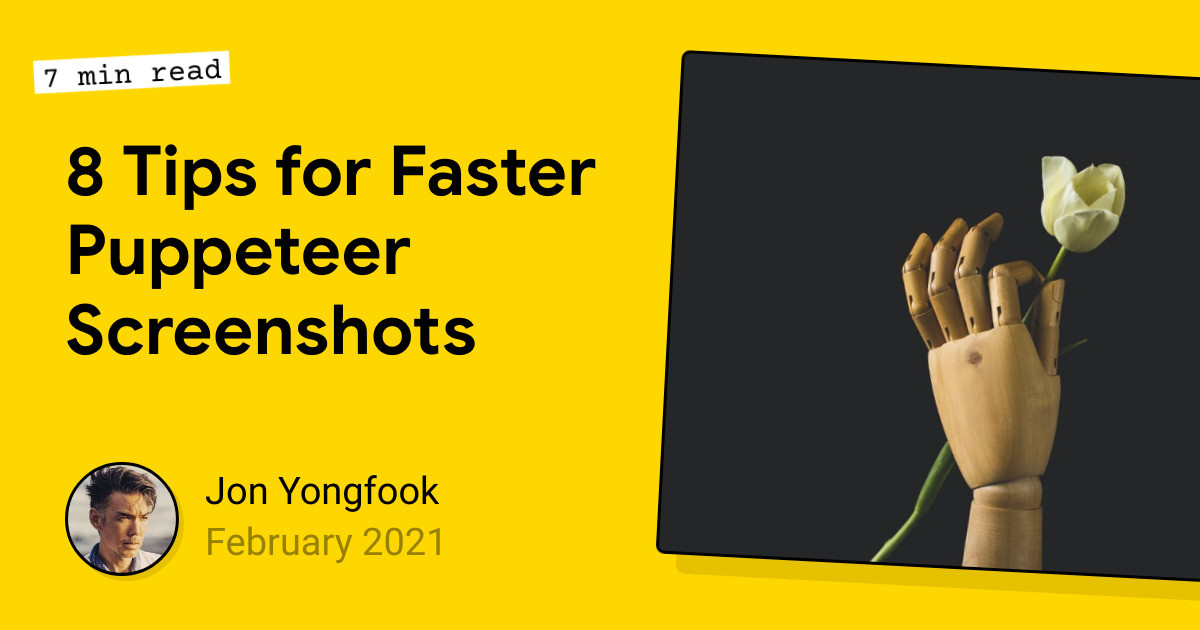 I also wrote an article on FFmpeg overlays which brings in a decent amount of organic traffic. I'll be making more time for content like this in 2022.

Right from the start I've invested a portion of my marketing energy in creating tutorial articles for people to either follow along with, or get a sense of what can achieved with Bannerbear.

In late 2021 I added a full-time content writer to the Bannerbear team, to help create more of this type of content. 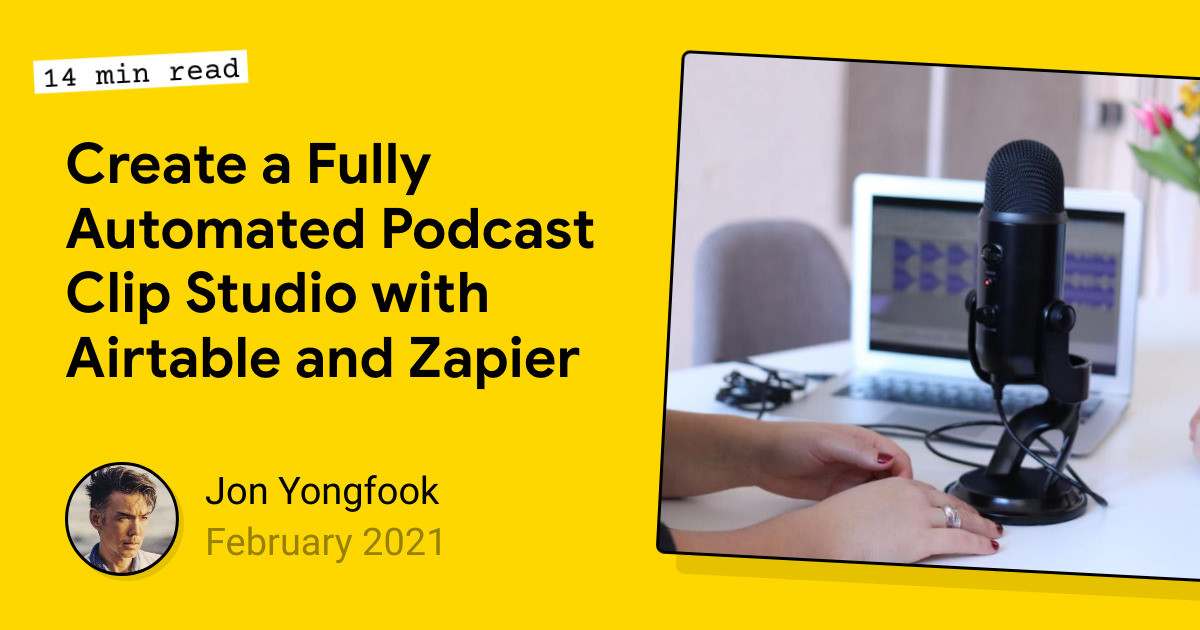 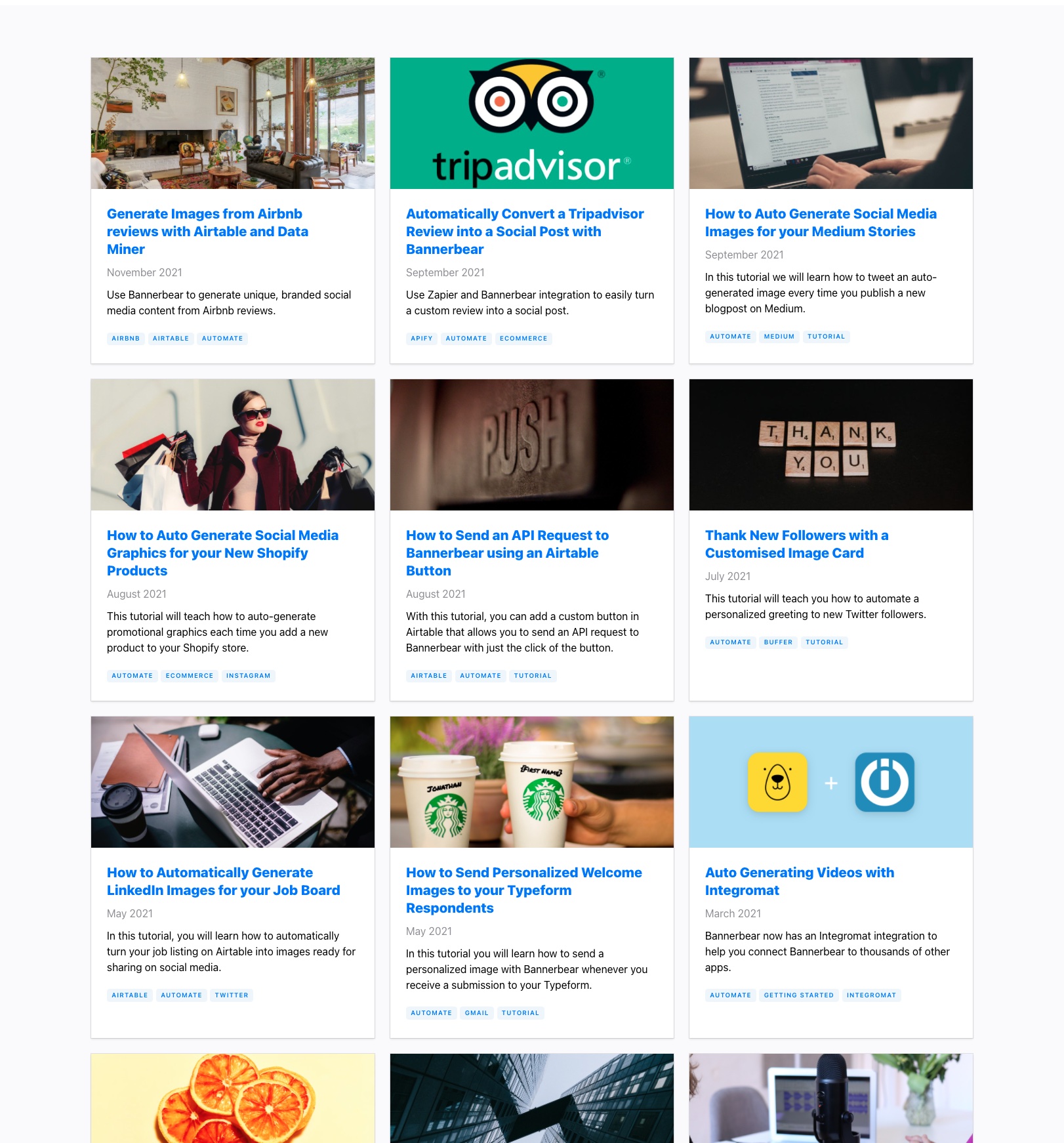 Adding demos to the marketing site

As much as possible I want people to be able to try out Bannerbear's functionality before they even sign up. So across the marketing site there are various demos you can interact with: an API console demo, image / video generation demo etc.

Generally when I launch a big new feature I will try to demo-ify it and put it on the marketing site for people to try out. For example the Smart Crop Demo and the Face Detect AI Demo.

In the middle of 2021 I launched a brand new API Docs site which I'm really happy with. The design is custom, but ahem "inspired" by the Stripe API docs which I think represent the best-in-class for developer docs out there.

The new docs are an improvement not just in design but also in coverage. Each endpoint is shown with sample objects, every parameter described in detail, and examples of using the endpoints with different data payloads. 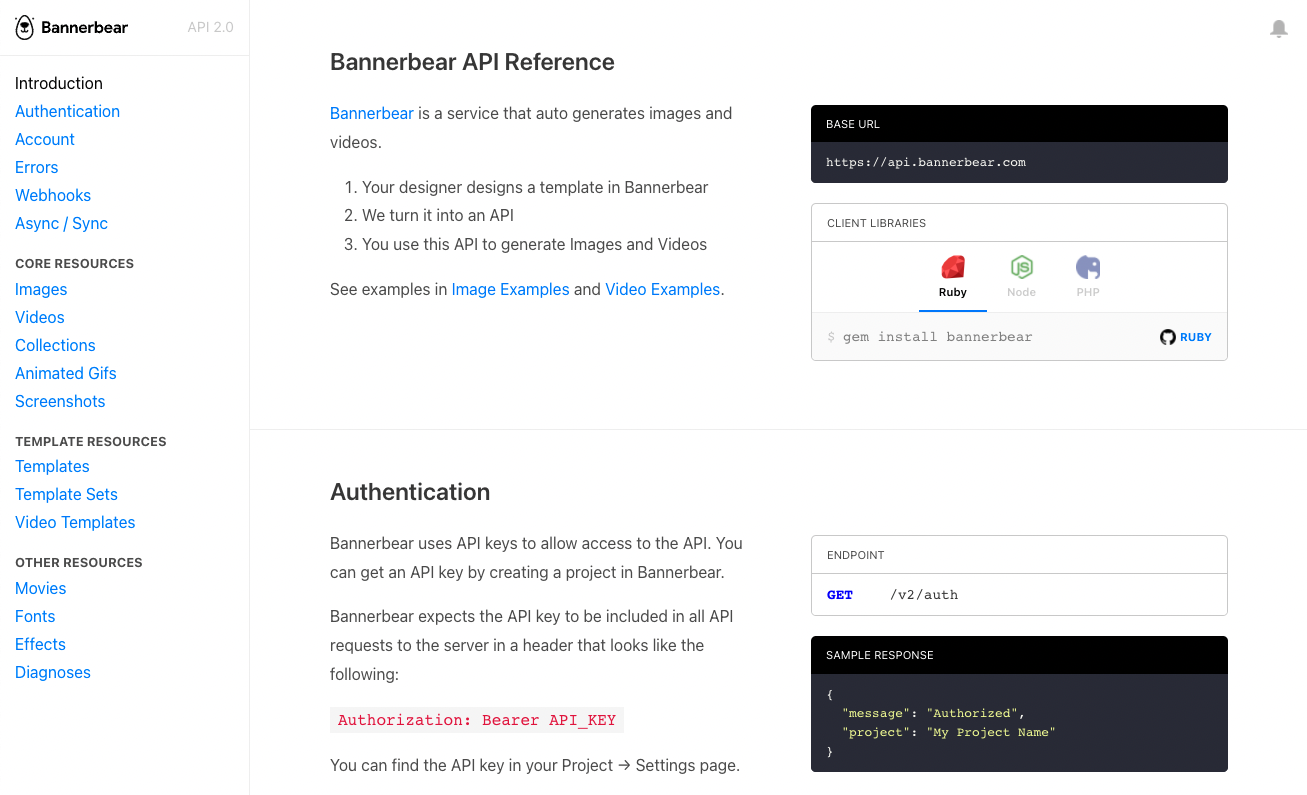 Later in the year I also launched an even simpler "quick start" one-pager which is just a list of API request examples.

Interacting with the community

I have done this less frequently as the year has progressed, but in Q1 and Q2 I was quite active on Indiehackers, and had a couple of popular posts like this AMA.

I also thoroughly enjoyed chatting with @csallen on the Indiehackers podcast!

By now I think it has lost a bit of its novelty, but in the beginning a lot of people loved the fact that I had a "Moto Meter" on my open startup page. I'm a huge motorcycle nut, so the "Moto Meter" was a visual progress bar of when I could afford my dream motorcycle.

Over the year I would improve little bits on the open page and tweet about it, which would usually get some likes and / or laughs. One of the biggest tweaks was when my Moto Meter was finally full, so I updated it to show progressively more expensive motorcycles, so there would always be something to "unlock" on the horizon. 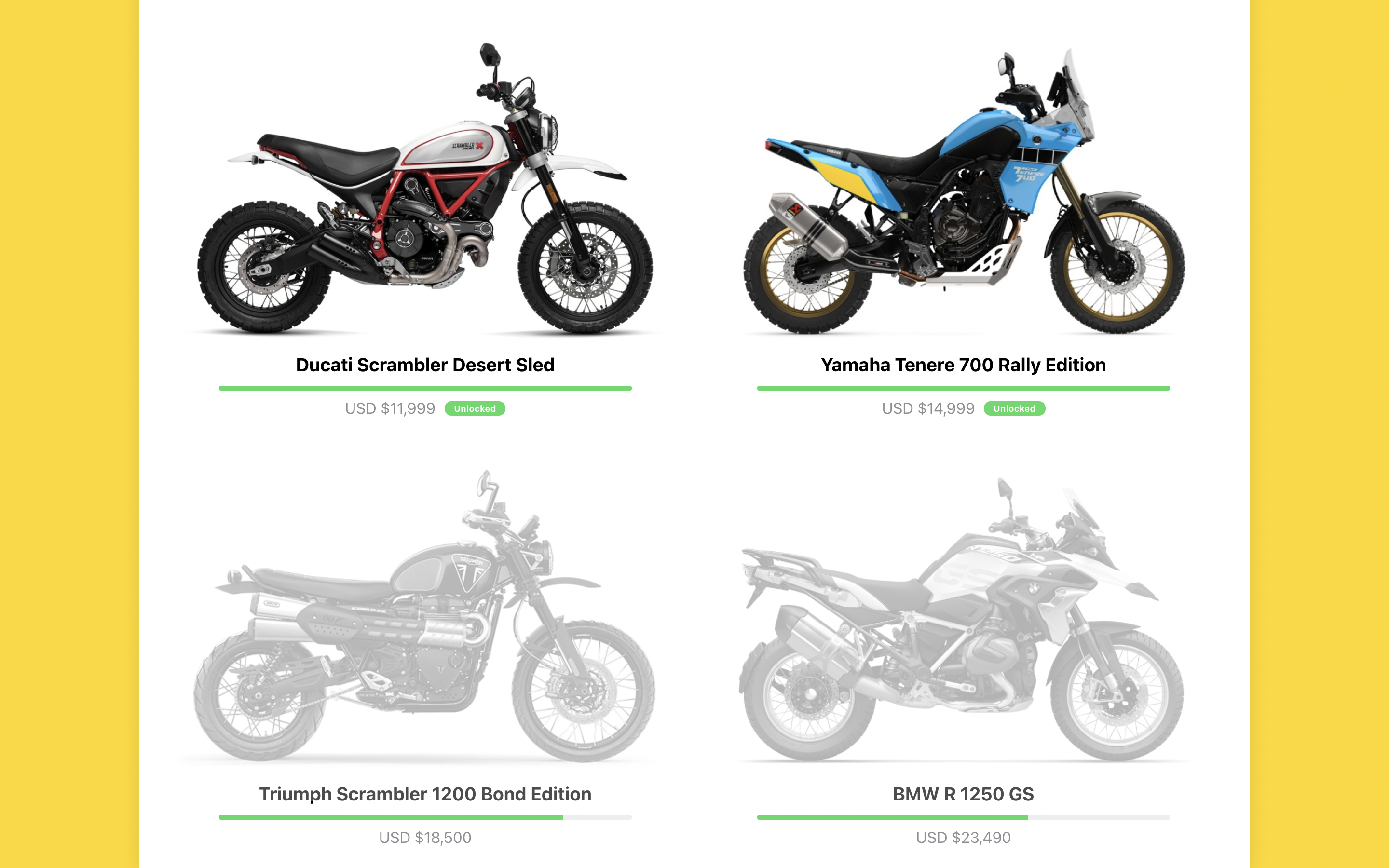 Getting a celebrity endorsement

There was no real science or strategy behind this one. I just thought it would be a fun thing to do. I got billionaire investor Russ Hanneman (he put radio on the internet!) from the show Silicon Valley to give me a pat on the back for reaching $20K MRR.

I did give Chris Diamantopoulos (the actor) a little bit of steer in terms of what I wanted him to say, but about 80% of the result was his own ad-lib and it honestly surpassed my expectations. When I received the video I cracked the biggest smile and wore it all day.

Lots of people on twitter also shared my appreciation for the clip. The video is available to watch below or on my open startup page.

By the way, Cameo has different rates for individuals and businesses. I went in thinking I would spend a few hundred bucks, it actually turned out to be a couple of thousand… totally worth it though!

In the last year I've advertised two roles on We Work Remotely and each time I was surprised to see that I got a spike in traffic and signups (and that's just the data that was captured by my privacy-friendly analytics, in reality there's probably more than what is shown in the chart).

My last advertised role - 100% remote customer support - had over 1000 applications, all having filled in a questionnaire as a filter. That's a crazy amount of people that my job ad must have been seen by.

I'm not sure what the lesson is here, just a note that you never know who might see your job ad. You could be discovered by a future customer. 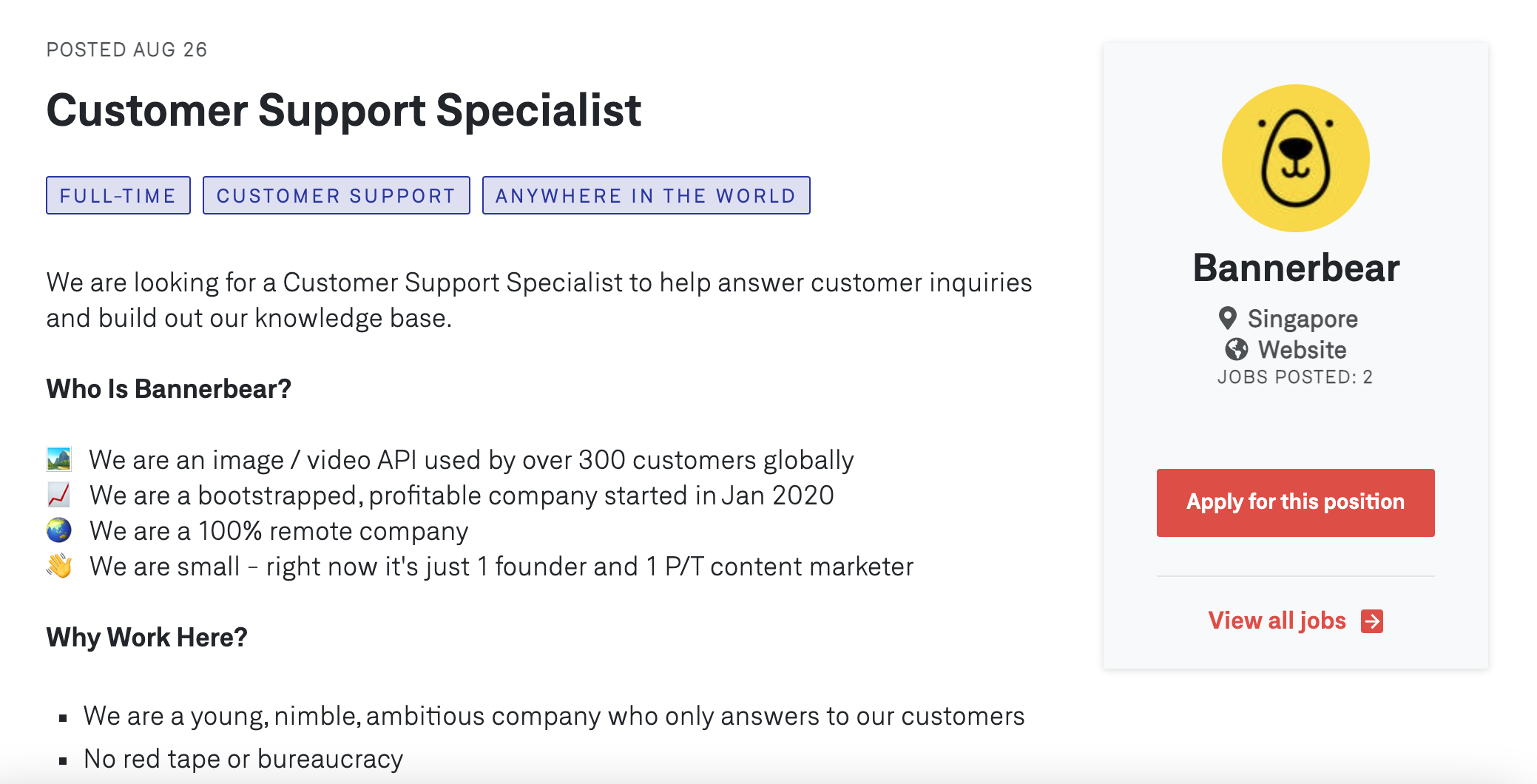 When I launched the PDF rendering feature of my API, I also created a simple free tool to show it off. And thus the Free Online Certificate Generator was born.

I'm now ranking on page 1 for that term, and the page gets a healthy amount of organic traffic. I will be investing more time into making more of these pages. 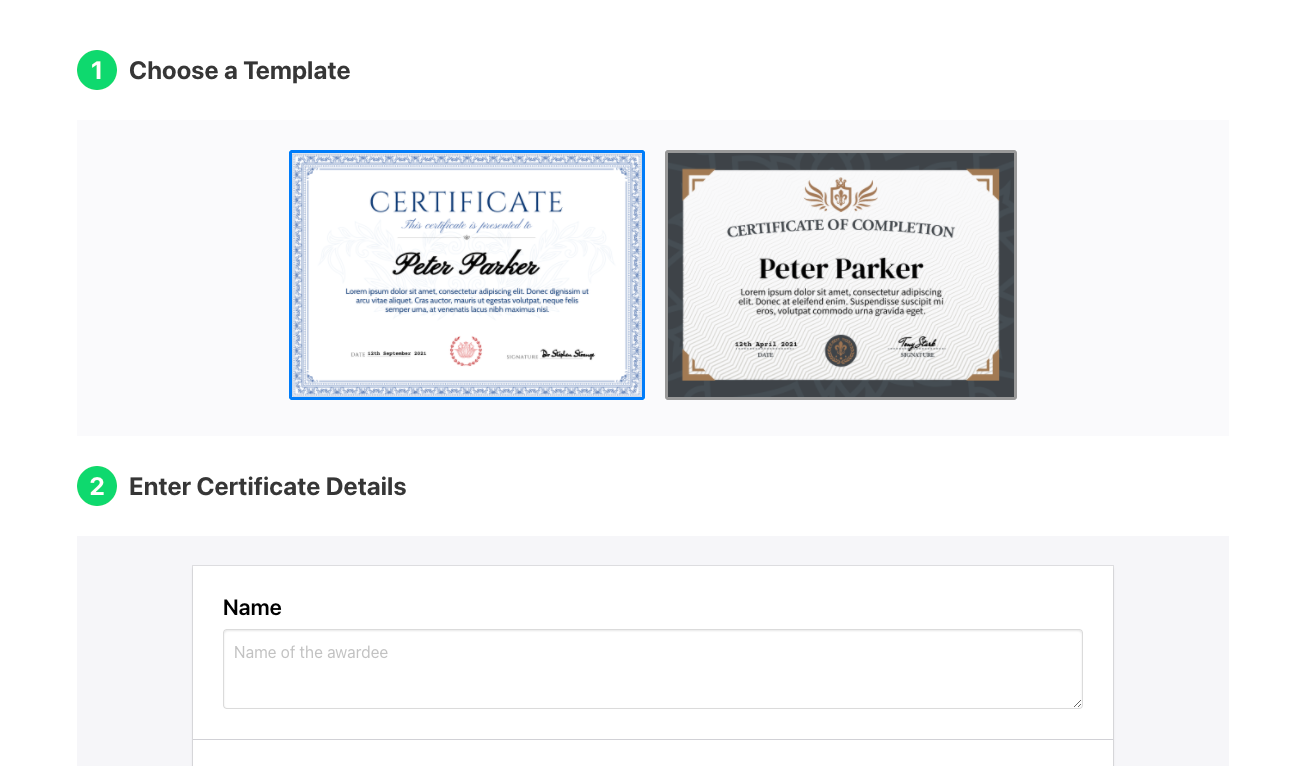 By now it should be obvious that one of my core marketing activities is content.

So in late 2021 I gave the blog section a huge refresh in terms of the design and the category structure. The layout is more lightweight than the previous iteration, works nicely on mobile, has a TOC available wherever you are on the page (useful when you're in the middle of a long tutorial), and some SEO improvements. 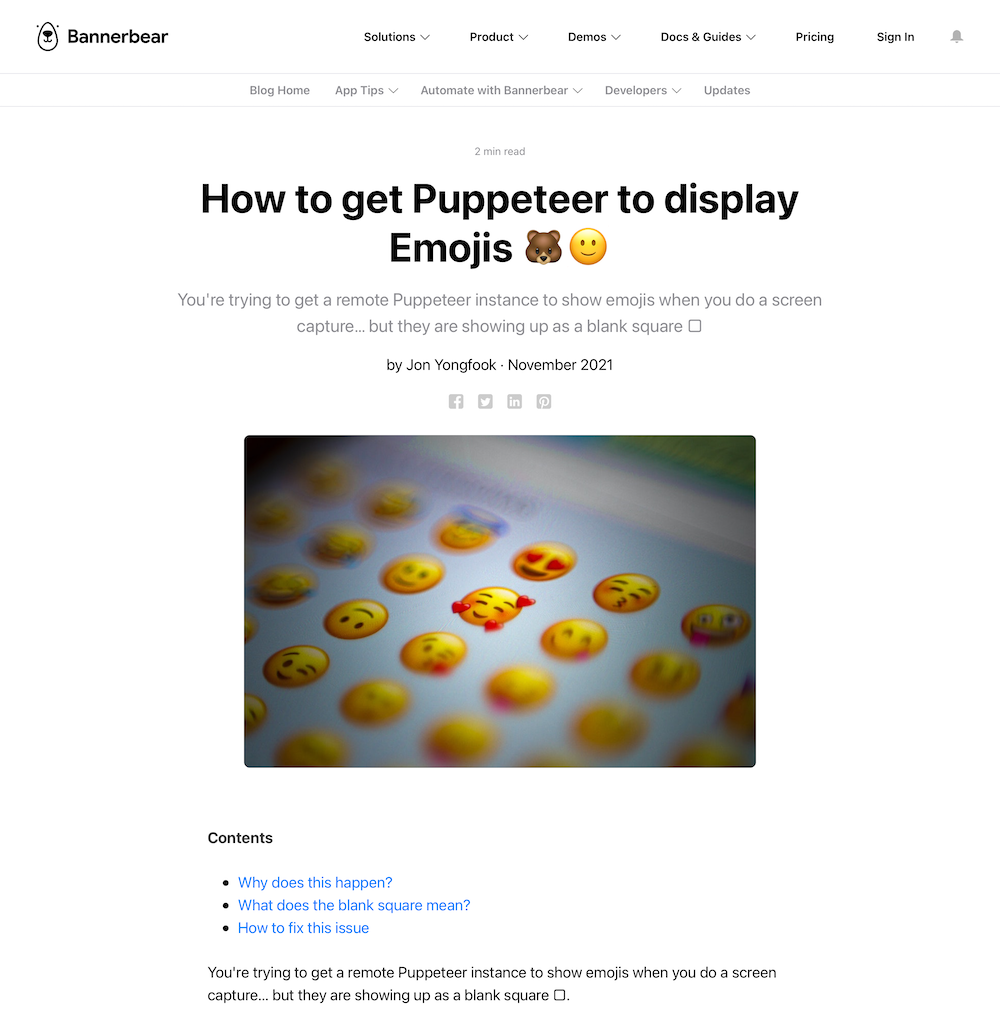 A few times a month I will log into Ahrefs and check that I haven't screwed something up SEO-wise. I'm not an SEO expert but I like the way Ahrefs systematically goes through pages and flags the important stuff to fix.

Launching the Knowledge Base

Believe it or not, Bannerbear was live for more than a year before it had a Knowledge Base. I was just too stretched between building the product, doing a bit of marketing, and answering customer support requests, to write all the content needed for the KB.

I put this in the same category as API docs; the more usable and thorough they are, the better the impression we give to prospective customers, and existing customers get access to answers faster. It's all part and parcel of branding / positioning, to me. 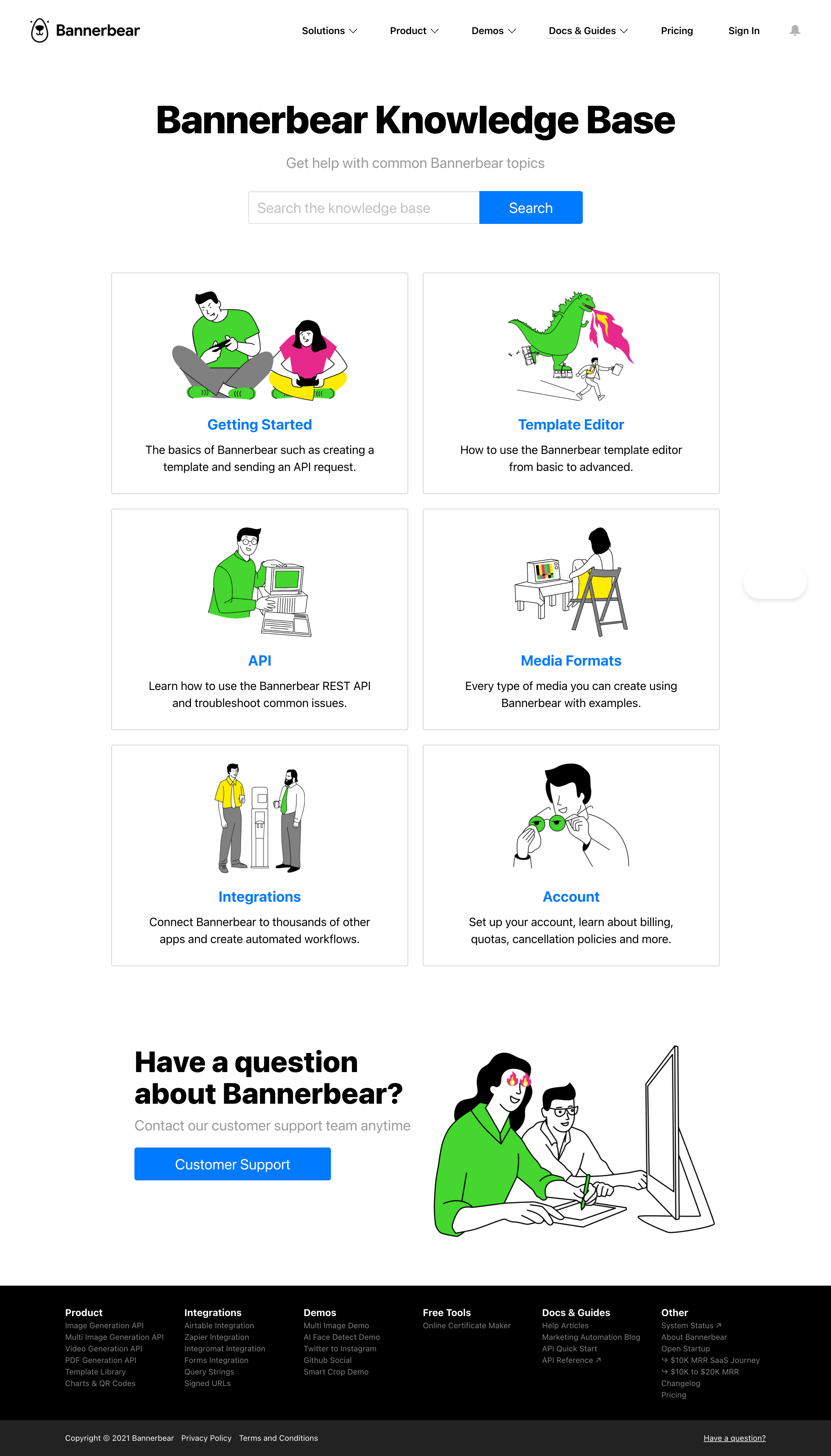 About the authorJon Yongfook@yongfook
Jon is the founder of Bannerbear. He has worked as a designer and programmer for 20 years and is fascinated by the role of technology in design automation.
November 2022

How My Startup Survived a DDoS Attack