Speed is key in 2023, test and ship fast. These five tools will get your tests running faster than ever. Find out more about how they can help to make sure your application functions as expected in this article.
by Josephine Loo · November 2022

However, testing can be time-consuming and tedious. That's why it's important to use tools to make it efficient and fast.

Automated testing tools can speed up the process and help identify issues that may be overlooked during manual testing. By understanding which automated testing tools are available and how they can be used, you can minimize the time needed and also reduce the impact of regression testing on your application's development.

In this article, we'll discuss five such tools, particularly for UI testing, and what they can do.

What is UI Testing

UI Testing is a process used to check the usability and accessibility of an application’s user interface. It involves using the application and interacting with its components to assess its functions, look, and feel.

Through UI testing, testers will potentially identify issues that affect the functionality of an app, whether it's a broken link, missing content, or incorrect input. Tests must be carried out thoroughly and systematically to identify these issues before releasing the code to production as they could negatively impact the application's functionality and even crash it.

Common tasks that are typically performed during a UI test include some of these:

In manual tests, testers use their skills to test the look, feel, and operation of a user interface while interacting with the application. They also test how users navigate through different parts of the application or perform tasks to look for any issues or malfunctions. This requires skills in analyzing user flows and identifying issues that may crop up along the way to make sure the test cases cover both common scenarios as well as edge cases.

Automated testing takes this approach one step further by automating all aspects of the test process by using computer programs to simulate user interaction with the application. This allows testers to run tests without human interaction, which can speed up the process and avoid human error. It can be used in a variety of applications, including websites, mobile apps, and desktop applications.

Now that we know a bit more about different options of testing, let’s see why you should use automated UI testing tools in your application’s development.

In this competitive industry where shipping time matters, there is no reason why you shouldn’t use an automated UI testing tool. On the other hand, here are the top reasons why you should:

Efficiency - Automated tests can run much faster than manual tests, allowing you to get feedback on new features immediately.

Productivity - Automated tests can help reduce the time needed to test your code, freeing up time for other important tasks.

Reliability - Automated tests can be run repeatedly and easily, making it easy to ensure that your code doesn’t break after new changes.

Consistency - Automated tests can be easily shared and reused across projects, making it easy to maintain a consistent testing approach.

Selenium is a free and open-source web automation project, consisting of Selenium WebDriver, Selenium IDE , and Selenium Grid. Each of them complements the other to carry out automated tests on different browsers and environments. 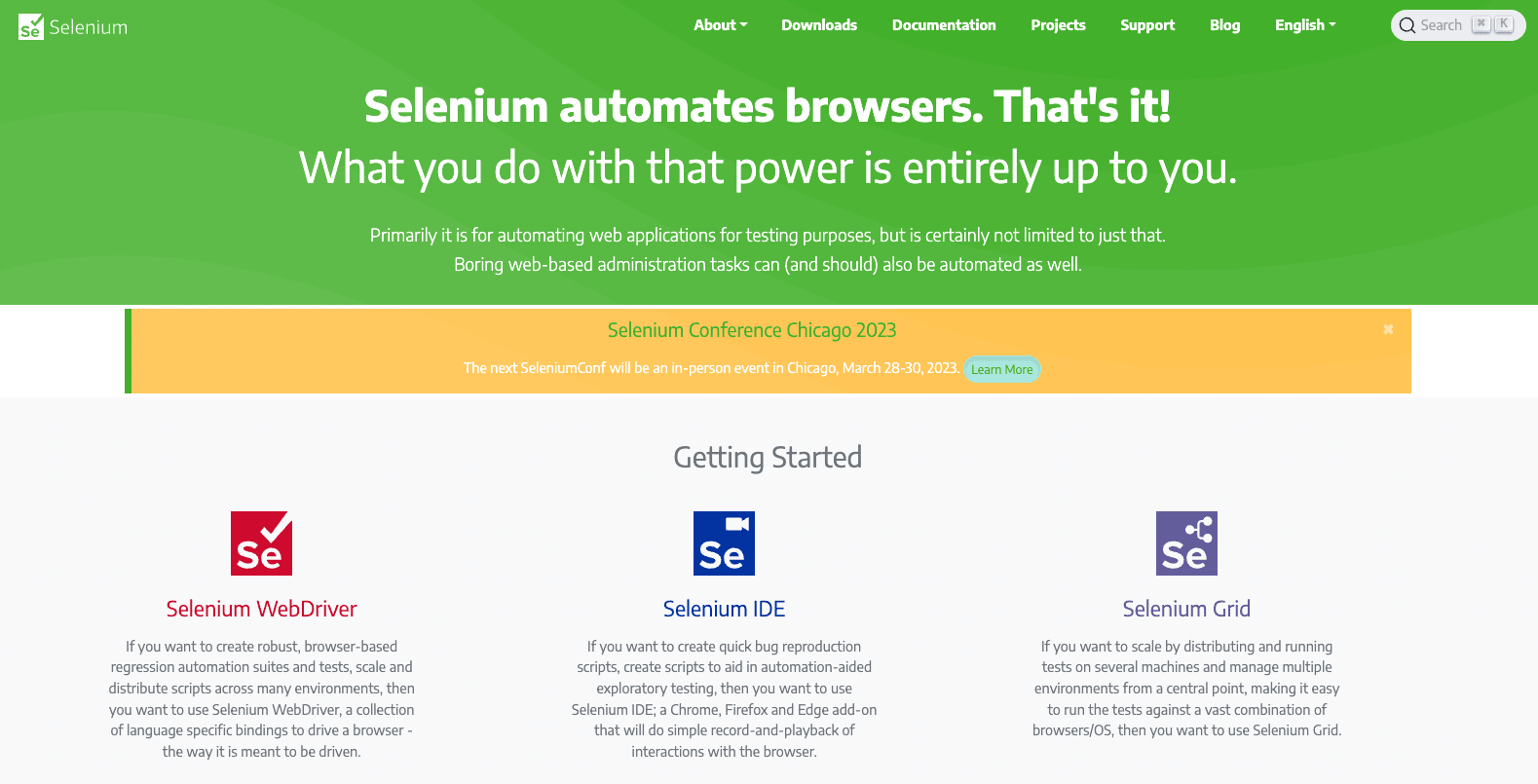 Among the three Selenium projects, Selenium WebDriver is the core of its automated testing ecosystem. It is an interface to write instruction sets that can be run interchangeably in different browsers as a real human would use them. Once you’ve installed everything, a few lines of code are what you need to get it running.

It supports cross-browser testing on most modern browsers and each of them has a dedicated driver to cater to its capabilities and unique features.

Licensed under the Apache License 2.0, the Selenium ecosystem has several bindings, plugins, and frameworks created and maintained by third parties in addition to the drivers. In June 2018, WebDriver became a W3C recommendation and is supported by major browser vendors like Mozilla, Google, Apple, and Microsoft.

✅ Has browser extensions to record and playback the tests

✅ Multiple tests can be run simultaneously on different browsers, versions, and operating systems

Cypress is an all-in-one testing framework that enables you to set up, write, run, and debug tests fast. It can be used to write all types of tests including end-to-end, component, integration, and unit tests. 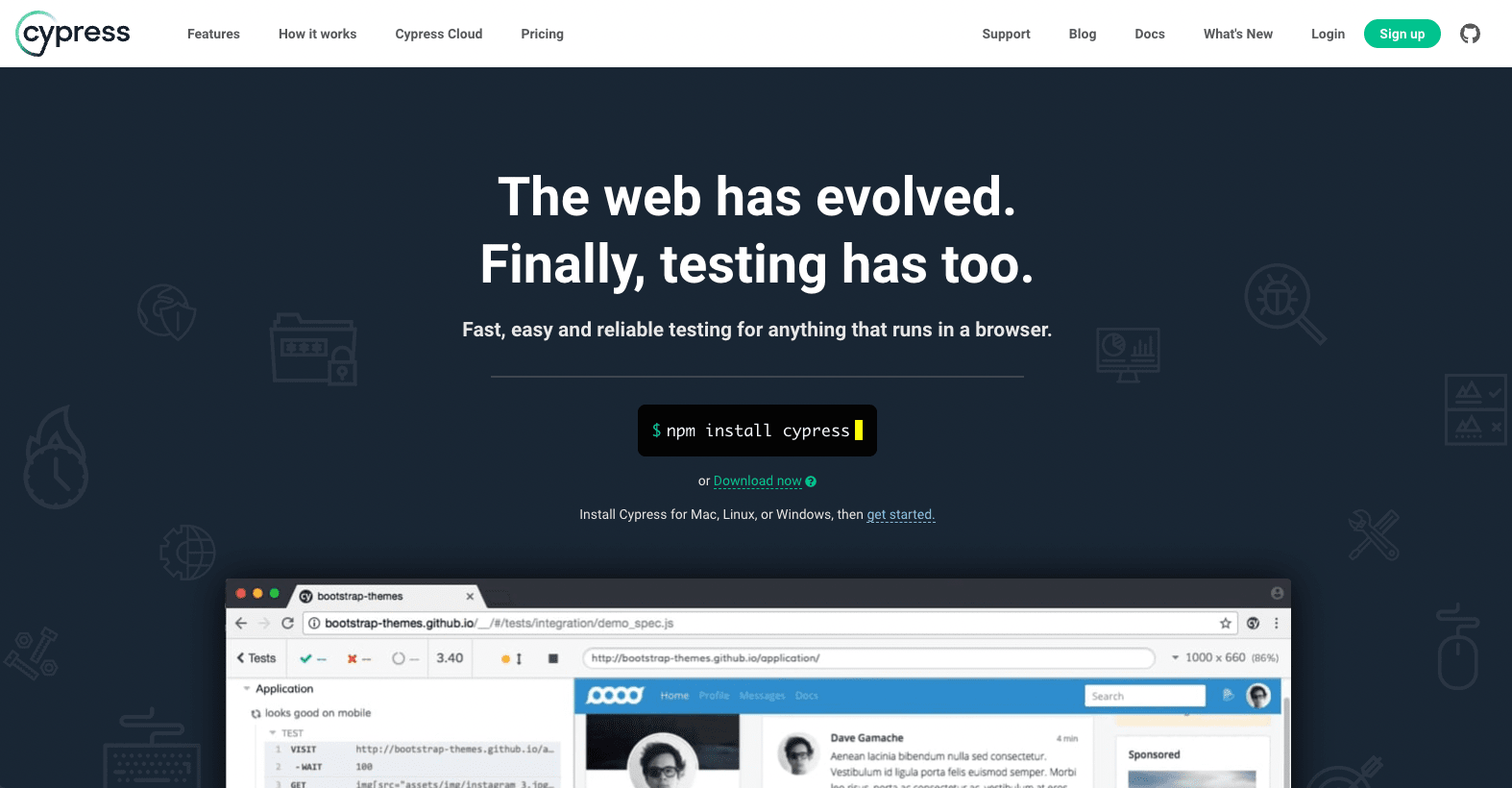 Cypress has two products— Cypress App and Cypress Cloud. The Cypress App is a test runner that allows you to write and execute tests in real-time as you build your web application locally while the Cypress Cloud is an optional web-based companion to the app to improve the speed with automatic parallelization and load balancing.

What makes Cypress stands out is its ease of usability and speed. All tools needed are included in the app. You can start writing your first test after installing the package in your project directory and view the errors directly from the browser’s DevTools. 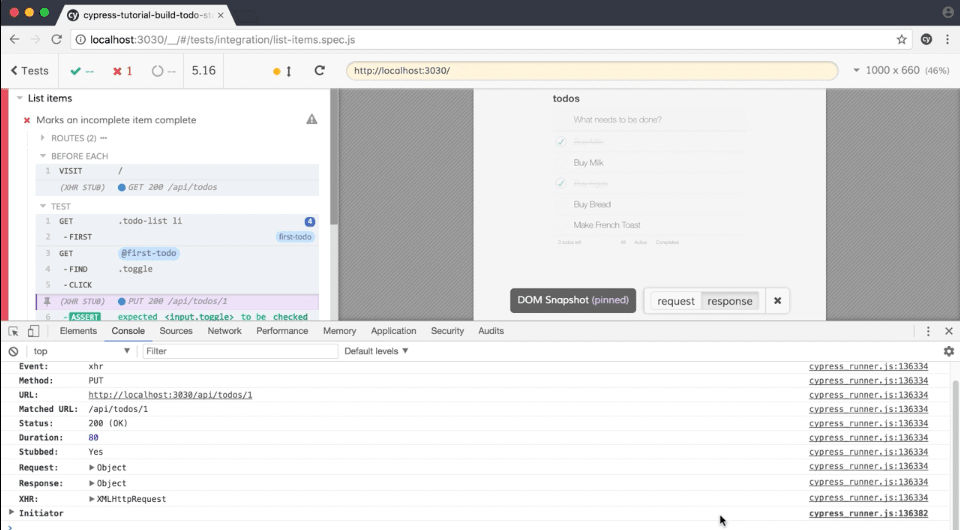 ✅ Network traffic can be controlled and stubbed to test edge cases

Puppeteer is a Node library that is open-source and maintained by Google. Different from most testing tools that are built for testing on different browsers, it is developed to provide a high-level API to control Chrome or Chromium over Chrome DevTools Protocol. 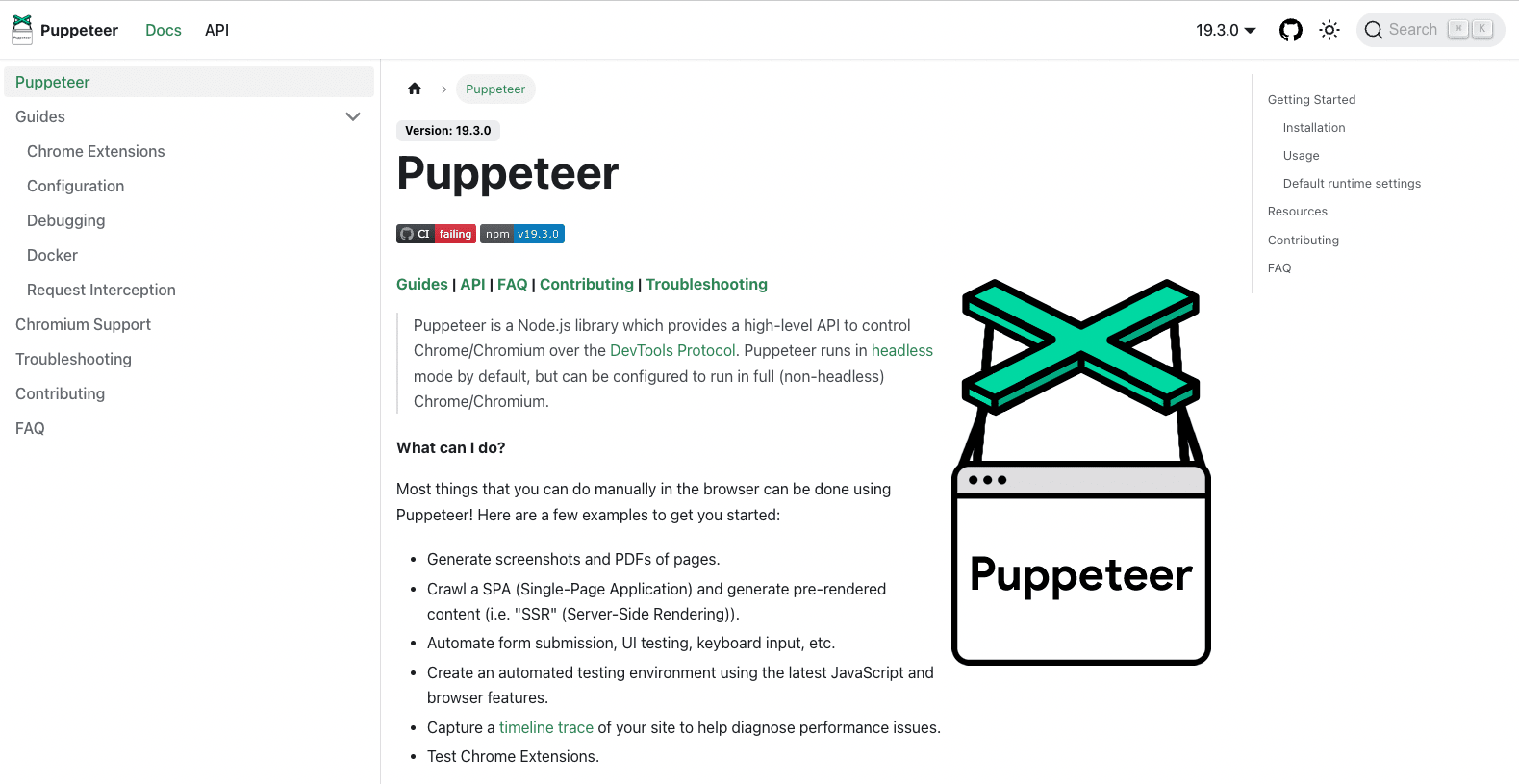 Technically, Puppeteer is not a testing framework but a browser automation tool thus you can’t write assert functions with Puppeteer alone. That said, it can be easily integrated into other Javascript testing frameworks like Jest, Mocha, Chai, Karma or an assert library to perform automated tests.

The image below shows some examples from jest-puppeteer that shows how to write tests that use Puppeteer and Jest: 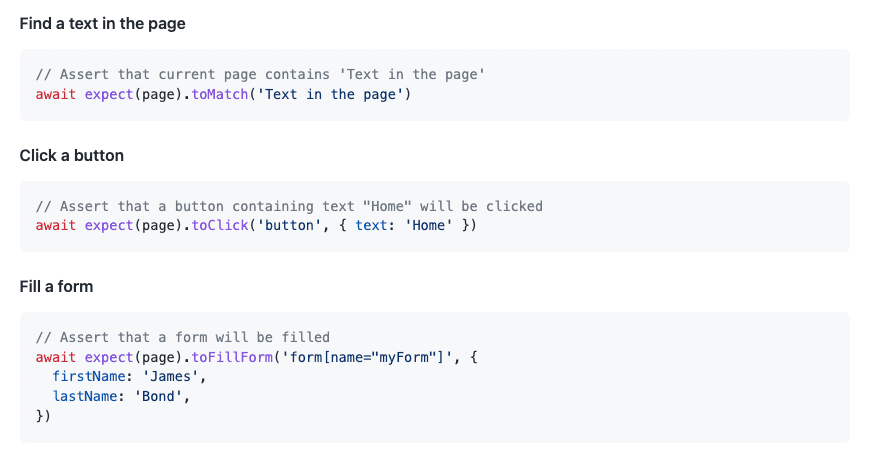 Besides running automated tests on a browser, Puppeteer can also be used to test Chrome extensions. Despite that, testing Chrome extensions using Puppeteer has some limitations as it does not support extension popups and content scripts yet (v19.3.0).

🐻 Bear tips: Check out our tutorial on How to Run Puppeteer with Firefox and other examples of  using Puppeteer.

Katalon Studio is a software testing platform that helps teams of any size to plan, author, and execute functional and UI automated tests seamlessly. It is built on Selenium and Appium to fully inherit their testing capabilities.

Katalon Studio makes testing effortless as it is a low-code platform. Despite this, experienced users can still do advanced operations using extensions. On top of that, built-in project templates with ready-made test scenarios, keywords, and object repositories are available, which can help you get started with your tests immediately. 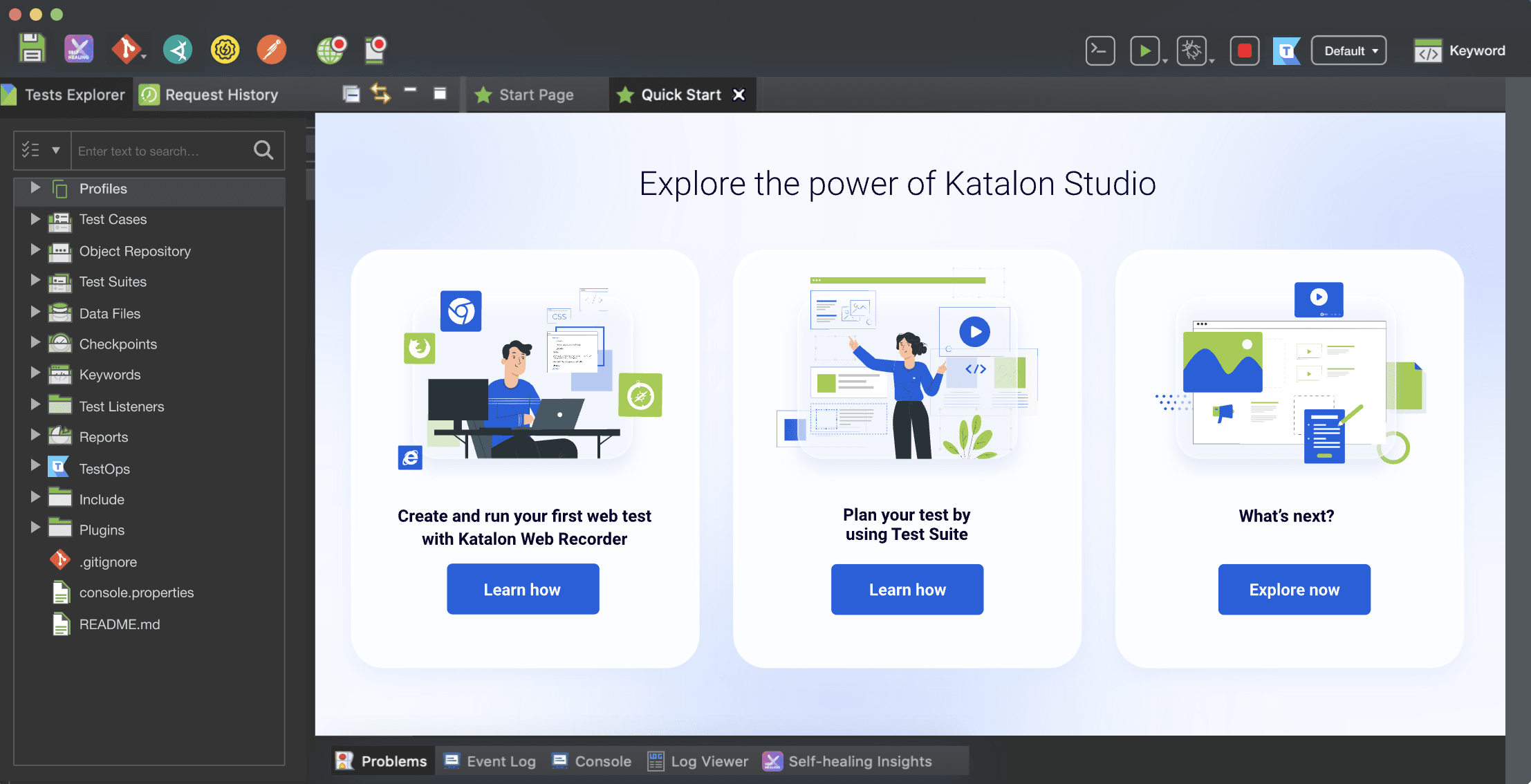 Another selling point of Katalon Studio is the implementation of artificial intelligence (AI) and machine learning (AI) in their tests. AI Visual Testing can be added and run in parallel with functional tests to cover both end-to-end scenarios and visual regressions.

One of its capabilities is the ability to spot tiny UI mistakes that can hardly be identified by human eyes, like a component or element that is misplaced by 1 pixel. It is also able to spot crucial changes to the application’s layout and/or content, not to mention that the time needed is significantly shorter too.

Storybook is a powerful frontend tool that allows you to design, build, and organize UI components in isolation so that you can render components without interference from the application’s business logic and context.

It is a perfect tool for applications that are built using component-driven Javascript frameworks like React, Angular, and Vue. It also supports server-rendered component frameworks such as Ruby on Rails (experimental).

You can perform various types of tests like visual, accessibility, interaction, and snapshot tests using Storybook to explore a component in all its variations regardless of complexity and it can be integrated with GitHub Actions to create an automated testing workflow upon code changes.

When you open a pull request, the CI (continuous integration) server will automatically run the tests mentioned above and provide a summary of the test results via PR badges.

Storybook makes frontend development easy especially when you need to work together as a team. It is used by frontend teams from top companies like Twilio, Adobe, Peloton, and Shopify to make sure that their testing workflow is productive.

When it comes to cross-browser testing, you can install add-ons on the platform to use popular testing frameworks like Cypress and Playwright. Add-ons make integration with other platforms and tools easy and there are plenty of them available such as Jira, Figma, Google Analytics, and more.

It is easy to automate UI testing when you have the right tools at hand and it can save you a ton of time and effort. Try out one of these tools to make sure your applications don’t break on new updates and see how quickly you can get work done.

They have well-documented guides on their websites and huge community support. So all that’s left for you is to start automating!