When you're in the early stages of your startup, one of the most fundamental business decisions you have to make is: funded or bootstrapped?

Funded: you raise seed funding from an investor (anywhere from $10K to $500K) to grow the business.

Bootstrapped: you use your personal savings and company revenue to grow the business.

There's no right or wrong answer to this, it will be different for every company based on their stage, ambitions, access to capital, connections, terms offered etc. This article is about my experience weighing the decision of funding vs bootstrapping.

Currently Bannerbear is bootstrapped, sitting at $45K MRR, and we are a happy remote team of 7 people working full time on making Bannerbear the best product in its category, with 500+ customers.

But rewind 2 years, I was a solo founder, no revenue, dwindling savings, and yes… I was looking around for funding.

This article isn't me saying bootstrapping good, funding bad!. It's a list of reasons as to why, in the end, self-funding was what worked best for me and why things have remained that way.

I'm Not Good at Raising Funding

Firstly, I suck at raising funding. The whole process of hyping up and pitching to VCs, being interrogated, negotiating terms etc, is all soft-skill territory that I'm pretty terrible at.

Other people have this talent, but I don't.

That said, you don't necessarily need this skill to raise funding, especially if you have some MRR already.

Seed investors can take a look at your MRR, growth rates, and offer you a deal based on that. In the early days I was talking to a couple of these investors, at around $1K to $2K MRR.

Conclusion: this stuff doesn't come naturally to me so I'd rather focus on the things I'm good at.

The actual logistics of raising funding can also be pretty complicated depending on your company set up and the investor.

You may need to re-incorporate in another country (e.g. USA) for example, and you will of course need legal counsel to review term sheets, changes to the cap table etc.

So the small seed round to bridge you to profitability now looks like it's going to suck up months of time and also a chunk of money too: incorporation, opening another bank account, legal review, and more.

Conclusion: As a solo founder, re-incorporating somewhere else sounded like it would waste a lot of time. Any time spent on paperwork-y stuff was time not spent on building the product.

I Had My Own Savings

I've mentioned this in a few places, such as my recap video, but when I started my SaaS journey I had about $200K in the bank to use as my "war chest". This was basically my life savings 🥴

So I was able to self-fund the early days, by just burning through my savings. Taking on some seed investment wouldn't fundamentally move the needle, it would just mean that someone else's money is being burned instead of my own.

Conclusion: I was comfortable spending my own money to see this through. I knew that in the worst case scenario I would run out of money, go and get a job for a few years, save as much as possible and then try again!

This is one of the great things about SaaS as a solo founder / SME business.

Subscription revenue compounds, and margins are generally good (70% is a number I hear often, for solo founders it will be even higher).

That means the difference between you needing funding for existential company-imploding reasons, and you being a ramen-profitable solo business can be just a matter of months. I've seen it happen in even less time.

Conclusion: A few months into talking with investors, I was already ramen profitable and suddenly my whole mindset changed. I kind of just wanted to grow organically at that point.

Being Funded by Customers Feels Great

There is a certain mental satisfaction in being 100% funded by customers.

It also fits the way I want to work. The more customers we get, the more money we make, and the more capital I have to deploy on growing the team, making product improvements, marketing spend etc. I'm learning all this stuff bit by bit so the organic pace is good for me.

The idea of having a sudden chunk of cash in the bank that I must deploy on various things all at once, frightens me. That's for someone who has run a business before, for me I'm happy to take things slow.

Some VCs and seed investors will tout their value add. This can be a very real thing if they have been an operator in the past, and can offer advice from a place of experience.

But I think startup twitter is already a pretty tight-knit place with lots of people sharing experiences, advice, and providing inspiration. And through a combination of Twitter and the digital nomad scene I've come to know and learn from many other SaaS entrepreneurs, some at a stage similar to me and some way beyond at multiple millions per year.

Conclusion: Value-add is a USP of some investors, but it feels like I'm most of the way there with the tech community online and nomad-ing.

I Don't Want a Boss

I'm 42 and have had some wonderful bosses, and others that weren't so wonderful… but I've reached a point in my life where I want to be my own boss, and grow a business the way I want to.

An investor isn't exactly a boss, but it is someone who can exert influence, and if you take on enough of them they can even fire you from your own company. I don't think you'd run that risk with a seed investor, but then again I don't know enough about this stuff really, and I'm too old and stubborn to learn about the politics of running a company with multiple investment partners, when really what I want to do is grow slowly with 100% ownership.

Conclusion: I have reached a point in life where I want less complications, and want to run things my way.

I'm obviously happy with this decision so I have a positive spin on it.

But what do you give up by bootstrapping? There must be some down sides. Here are some that I can think of:

I hope that gave you some insight into my decision-making process. I was considering taking on seed investment around May 2020 ($859 MRR) and by August 2020 ($3771 MRR) I was ramen profitable and had pretty much parked that idea.

I'm very happy that we have been on this self-funded journey for the last 2 years and I intend that to continue! 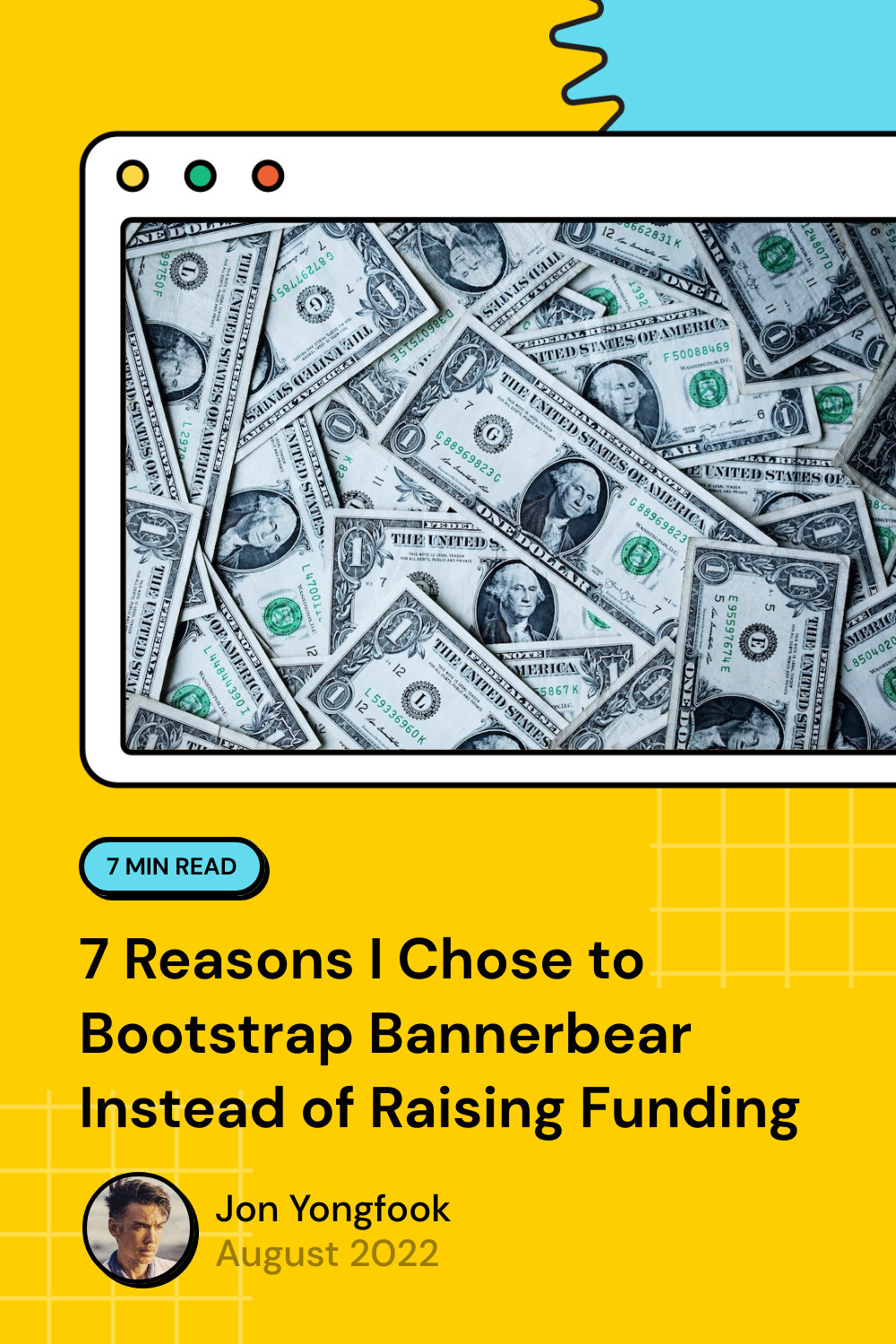 Other resources on Bannerbear with the tags startup

5 Technical Mistakes I Made Growing a SaaS to $40K MRR

Here are some of the things I messed up on the technical side while growing my SaaS company.

Many entrepreneurs find marketing difficult, and I'm definitely one of them 🥴. I'm a technical founder so I naturally prefer to spend my time building features, and I've certainly done a lot of that in the past year. But in this post I want to share...